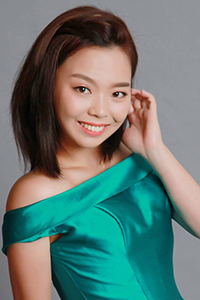 Born in Athens, Georgia, Belinda Chen gave her first piano recital in 2001 at the age of eight, and has since gone on to perform at venues such as Kennedy Center’s Millennium Stage in Washington D.C, the Teatro Massimio Vincenzo Bellini in Catania, Italy, the Savannah International Trade and Convention Center in Savannah, GA, and the Osaka International House in Osaka, Japan. She has performed as a soloist with the Bellini Symphony Orchestra in Catania, Italy, and the Frost Symphony Orchestra in Miami, FL. Miss Chen is the winner of the 2018 AmicaFest Concerto Competition (Catania, Italy) and the 2017 Frost Symphony Orchestra Concerto Competition (Coral Gables, FL). She was also the first prize winner of the Eastside Music Teacher’s Scholarship Competition (2008), the Performing Arts Festival of the Eastside (2010), and the East shore League Solo and Ensemble Competition (2010). She was named the third prize winner at the 11th annual 1000 Islands International Chopin Competition.