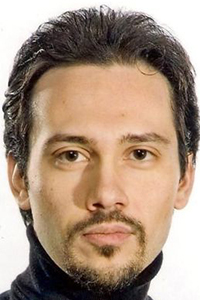 Roberto Franca, pianist and composer, began studying piano at the Conservatory “G. Rossini” in Pesaro, where he graduated in 2002 with highest honors, praise and mention. In 2005 he was admitted to the International Piano Academy “Incontri col Maestro” in Imola, where he studied piano with Maestro Piero Rattalino and Boris Petrushansky, and composition with Maestro Marco di Bari. He also received lessons from renowned Professors as Franco Scala, Oleg Marshev, Joaquin Soriano, Louis Lortie, Zoltan Kocsis, Robert Levin. In 2007 he won the fourth prize at the International Piano Competition in Valladolid (Spain) and he won many other prizes in several competitions in Italy and abroad. He played at the Accademia Filarmonica in Bologna, Teatro Regio in Parma, Teatro delle Muse in Ancona, Auditorium Gaber in Milano, among many others. He played Beethoven Piano Concerto n. 3 and Prokofiev Piano Concerto n. 2 in Moldova. He currently teaches in Milano for the Ricordi Music Schools.