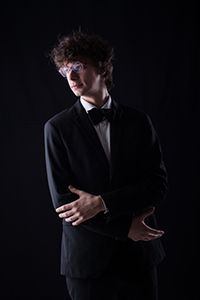 Between 2008 and 2011, Matteo Bevilacqua made his debut performing in two theater productions for the “CSS Teatro stabile d’innovazione” travelling around Italy in several tournèe. He started his piano training at conservatory “J. Tomadini” in Udine, first with Massimiliano Ferrati, then under the guidance of Luca Trabucco. He obtained final graduation (Bachelor) with highest marks and “cum laude”. In 2019 he obtained the Master degree with 110/110, laude and special mention. In 2015 he was assigned a scholarship from the International Keyboard Institute & Festival to take part at the festival and study in New York with Arnaldo Cohen and Alexander Kobrin. He takes part in international piano competitions since 2008, winning more than 20 prizes. Recently he has won the Palma d’oro in Finale Ligure IPC, the 3rd prize at Albenga IPC and the 3rd prize (plus audience special award) at S. Donà IPC. He performs around Europe and in renown festivals and seasons (Mittelfest; Carniarmonie; Accademia Ricci seasons; etc).