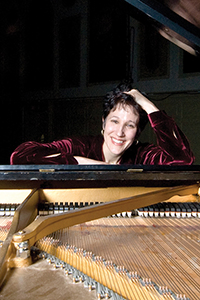 Though established as an interpreter of twentieth and twenty first century music, pianist Deborah Nemko is equally at home playing the music of Ravel and Glass or Brahms and Beethoven. She regularly appears in concert throughout the United States and abroad as soloist and collaborative artist. Nemko has performed in prestigious venues including the Weill Hall of Carnegie Hall in New York, the Shanghai Oriental Arts Center and the Bethanienklooster in Amsterdam. In Taipei, Taiwan, Nemko was recognized by the Taipei Times with violinist Annegret Klaua for their outreach concert to Alisan, Taiwan. Nemko is a frequent recording artist; her recordings of the piano music of Dianne Goolkasian Rahbee and Grazyna Bacewicz are compelling. Reviews of her performances describe her “beautiful and incisive playing.”
After completing a 2015 Fulbright Fellowship to the Netherlands for her project, “Suppressed and Forgotten Dutch Composers of World War II,” she developed innovative recitals and workshops on Dutch Composers of the Holocaust. At Brooklyn College she performed her concert, “Music in the Time of Anne Frank” in early March, 2020 (the last concert to be performed there before the university was shut down), and at York University, Toronto, in early 2019 was artist in residence with the Centre for Jew Studies and the Centre for Refugee Studies where she gave a concert, lecture and master class.  Additionally, in early 2019 she performed at the Library of Congress for the “Anne Frank Awards Ceremony” sponsored by the Embassy of the Netherlands.
Deborah is a frequent guest artist clinician for the piano seminars at New England Conservatory’s Preparatory Program and presented lecture recitals nationally and internationally on the music of Tania Leon, Dianne Goolkasian Rahbee, Henriette Bosmans and Grazyna Bacewicz. In conjunction with the University of Pennsylvania Design Institute-Paris in the Schola Cantorum in Paris, Dr. Nemko performed a program entitled “Le Corbusier and Xenakis’s Methods of Composition and Rhythmic Structures, Spanning Between Architecture and Music” with University of Pennsylvania faculty.
A committed educator, Dr. Nemko has served as visiting faculty at Utrecht Conservatory (The Netherlands), on the faculty of the International Master Classes in Belgium with Madame Diane Anderson and the Grumo International Music Festival. Dr. Nemko is Professor of Music at Bridgewater State University and faculty member of New England Conservatory’s Piano Preparatory and Continuing Education Program. Her teachers include Nohema Fernandez, Joel Shapiro, and Gordon Fergus-Thompson.